March 26 2014 was a landmark day for the medical community in Central Asia. Cardiologists from Kazakhstan, Tajikistan and Turkmenistan attended a regional conference alongside their colleagues at the National Center of Cardiology and Internal Medicine in Kyrgyzstan. Nothing out of the ordinary you might think, however this event was different. This time the participants, there to discuss “Mirrahimov Reading” on modern aspects of cardiology and internal medicine, did not have to travel the usual long distances and use up valuable clinical time. For the first time, the cardiologists were able to take part remotely from the comfort of their hospital offices thanks to high-quality video links that have just become available over the recently upgraded Central Asia Research and Education network, known as CAREN. 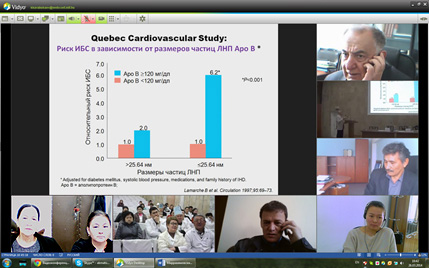 Co-funded by the European Union, CAREN provides a high-performance broadband Internet for research and education, facilitating communication, information exchange and collaboration between universities, teaching hospitals and research centres within Central Asia and providing access to the European and global research community through interconnection to GÉANT, its European counterpart.

Up to now there had simply not been enough bandwidth within Central Asia to allow such a specialist conference to be conducted via the Internet. While in other regions telemedicine is becoming commonly used, Central Asia had been lagging in this field. A year ago, Dr Kanat Batyrbekov, Endoscopist at the Research Institute of Traumatology and Orthopedics in Astana, Kazakhstan, spent time at telemedicine-pioneering Kyushu University Hospital in Japan; he soon saw the potential of telemedical training within his own region:

Harnessing the CAREN network, Central Asian healthcare professionals and network engineers see the conference on 26 March as the first of a long term programme of such regional events with potential for directly improving patient care.

Telemedicine sessions help address, in particular, resourcing difficulties at hospitals in regional and remote areas where doctors often lack specialised skills to treat patients with severe conditions. Supplementing traditional care with a telemedicine scheme offers doctors a new way to interact and learn from each other. Follow-up telemedicine sessions are scheduled and discussions are underway to extend the programme beyond cardiology as well as to doctor-patient tele-consultations.

All this has been made possible by the upgrade of the CAREN network which has seen link capacities increase ten-fold since the start of the project in 2010 despite the continuing challenges of the telecommunications markets within Central Asia.

Increased bandwidth, together with improved network performance will also boost other research and education collaborations within the region and with other parts of the world in areas such as seismology, glacier monitoring, solar technology and distance education. A good example of the growing demand for bandwidth is the Kazakh National Agrarian University in Almaty, one of the oldest academic establishments in Kazakhstan, which is continuing to increase usage as it connects its 10,000 students, 900 staff members and provides international connectivity for collaborations with over 20 partners across the globe.